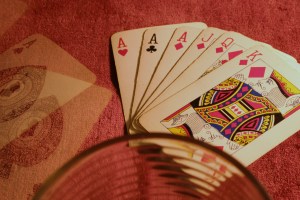 The pack was always there in front of him, on his suedette pouffe, waiting to be held. When he gave the nod, I would pour the drinks and he would deal.

We never played for money and, unlike other games with other players whose backs stiffen and hearts close, a hand of cards with him was based on the notion that the real game, the real fun, was in playing with luck herself. “She likes a warm room,” he would say.

At certain points there was a song.  As he arranged his hand: ‘I, who have nothing’. If I picked up something he wanted: ‘Safe in the arms of Jesus’. And if I won: ‘But most of all I love you cos you’re you’. But there was one card – discarded, ignored or long-awaited – that prompted a song he’d only heard me sing and tilted the game towards sweet surrealism: ‘The ace of spades, the ace of spades’. He sang it so earnestly, his Doric inflection making each word ring…